Sports and culture, a perfect combination on 3/29/2015 when I went to watch a great NBA game at Barclays Center in Brooklyn: Brooklyn Nets vs La Lakers!

When I entered the Stadium about 30 minutes before the game, I was so surprised to see two of our Chinese music teachers Feifei Yang and Ju Jia’s beautiful face on the giant screen and playing Er Hu and Pipa. The red “Celebration of Chinese Culture” banner was flashing for an audience of 20,000. The atmosphere was so high and warm.

After some Chinese performance,  the American national anthem was sang by a Chinese American singer. After that, a little Chinese American boy appeared on screen speaking mandarin for about 2 minutes explaining the “Celebration of Chinese Culture”. He was so cute and performed his assignment flawless. I thought for myself, I wish more parents would understand how important it is for their children to learn Chinese.

Then came the exciting moment and the two teams were introduced by a male mandarin voice. During the game more Chinese art was introduced such as the lion dance for example. Fan dancing was introduce and the music, performance and all details were all beautiful.  Of course, I wish to get a T-shirt with “Ni Hao, Brooklyn” by gun pump. Also, to the disappointment of fans, Jeremy Lin was absent due to sickness.

As a Chinese, and as a Chinese teacher, the experience at the Barclay’s Center made me proud. America is a free country with a multi cultural population and I appreciate that a lot. The evening motivated me for my work ahead. Teach children Chinese/Mandarin and help American businesses to become successful with their efforts in China. Mandarin will play a more and more important role in business communications around the world. Congratulations to the Nets for showing an understanding of this matter and providing a hint for parents and children alike . 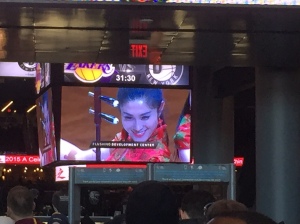 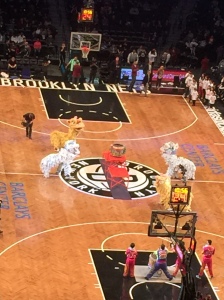